You can Use English Words as Japanese

Many English words have been adopted as Japanese. For instance, “head,” “hair,” “eye,” ”ear,” ”neck,” “hand,” and “foot” can be understood by Japanese. The number of foreign words (mainly English) which are used as Japanese is approximately 3,500. It means that people from English-speaking countries already know so many words and can express themselves fairly well without knowing many Japanese words.

On the other hand, written Japanese is one of the easiest in the world if you do not have to learn kanji. The spoken language consists of 46 syllables and 58 syllables in modified forms. Hiragana and katakana characters represent these syllables. In other words, hiragana and katakana are phonetic. Katakana is basically used for foreign words.

Even beginners of Japanese can communicate with Japanese using katakana (English) words if you know basic Japanese grammar and what you say can be expressed in hiragana and katakana.

The lunch at that restaurant is best.
あのレストランのランチはベストです。

That movie was exciting.
あのムービーは、エキサイティングでした。

As you see, it is not difficult to express yourself. However, as kanji is used in newspapers, magazines, signboards and so on in daily life, you cannot ignore kanji. Kanji learning is a burden to Japanese learners, but is useful.

In Japanese there are many words that are pronounced the same but have different meanings. For instance, “kawa.” You don’t know in hiragana whether it is “river” or “skin.” If they are written in kanji you can easily distinguish them.

If you do not know these kanji, type “ka” and “wa” on your computer. The kanji list for kawa, including the meaning “river,” “skin” and “leather,” will be shown. Checking these words with a dictionary, you will be able to find the one you want to use. You can input text with Japanese word processor software, which is convenient to learn kanji, in hiragana or romaji.

The best part of kanji is that you can express contents briefly, as below.

When you are in a city you will notice there are many signboards using hiragana, katakana and English besides kanji.

For example, a signboard that says “to let.” As shown in the pictures, some are written in kanji only, in katakana, English or in combinations.

Japanese use English words as modern or “fashionable” words, just like kanji had been adopted in Japanese. In accordance with the increase of Japanese who study English, more English words will be used as Japanese in the future.

Sharp rise in the number of women interested in swords

Tap Water in Japan is Safe to Drink 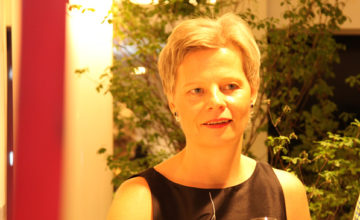 Music is the Bridge Between Latvia and Japan